The goal of this capstone design project was to design a fully automated data collection system that could be installed in diesel or gasoline motorboats to monitor engine RPM. The system is based on processing signals from: the w-terminal on a diesel engines alternator or an inductive pickup placed on a gasoline engines spark plug. These signals are processed, under software control, to calculate actual engine RPM. Engine RPM readings are time and position tagged with GPS data from a small, low power, OEM GPS unit and stored to a DOS compatible file on a Compact Flash card interfaced to the internal embedded processor system. The prototype system can be powered from a battery pack for up to a week of data collection. Once data is collected, the Compact Flash card is downloaded into a desktop system after which Geographical Information System (GIS) software is used to remap the GPS engine RPM data to a physical location on a user viewable city map. The prototype is intended to be placed in motorboats that roam about the Venetian lagoon in order to map the occurrence of underwater turbulence in the form of engine RPM. This system can aid the city of Venice, Italy in identifying areas that suffer from constant underwater turbulence and by correctly correlating canal wall damage to underwater turbulence, canal repair crews can be released more efficiently. 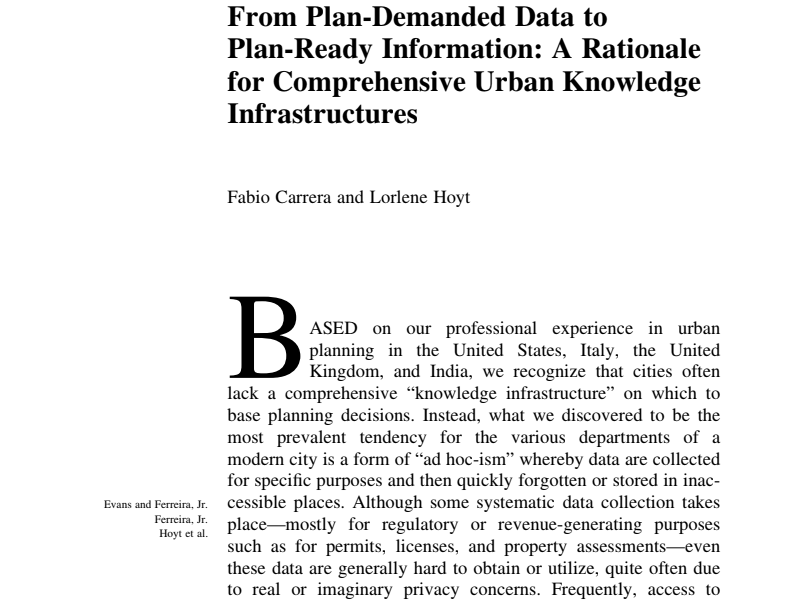 From Plan-Demanded Data to Plan-Ready Information: A Rationale for Comprehensive Urban Knowledge Infrastructures